I received this email and photos today, from someone who is having a lot of trouble convincing Croydon Council that they have responsibility for the fly tipping that is occurring at the bottom of her garden.

It is sad to see that our elected representatives are so adept at "passing the buck", yet unwilling/unable to resolve problems such as this.

I hope you can help me.

I live in Valley View Gardens in Kenley and my property backs on to what was the old Bourne View allotment site. I believe that about 5 years ago the allotments flooded very badly and badly damaged property in Bourne View. Since then Croydon Council and Sutton and East Surrey Water (who apparently own the land) invested £130,000 building a floodbank and culvert to prevent this happening again and fenced in and gated the area so there is no access to the general public. This was about 2 years ago when I just moved into my property, in the process of carrying out this work they removed a lovely screen of trees from the site which was behind my garden so now I have clear view of the new concrete culvert and the allotment site itself. (lovely!) a problem I could live with but now a resident in Gomshall Gardens (also backing on to the allotment site) has taken to dumping his rubbish in the culvert which is directly behind my property.

I have spoken to Croydon Council who have told me that they do not own the land and therefore it is not their responsibility. I then spoke to Sutton and East Surrey Water who said that as Croydon Council constructed the culvert they would be responsible for it. I went back to the council who said that as the fly-tipping is in a river bed (the old Bourne Stream) it was the Environmental Agency's responsibility. The EA when I spoke to them have denied this and said it is the responsibility of the local council!

Even though I have pointed out the property of the resident who has carried out the flty-tipping no warning letter have been sent as they have continued to add to the ever growing eyesore.

My property is a beautiful detached chalet bungalow which I have now been told by local Estate Agents would be nigh on impossible to sell at what would be the market value. I have appealed to the valuation tribunal to lower my council tax banding (not that they will but I am exploring all avenues! And trying to make a nuisance of myself so something is done)

Do I have to go to the expense of erecting a 7 foot high fence to block out the view before I can sell my property? Of do I have to climb down in to the culvert and attempt to remove the sofa, chairs, microwave etc myself?`

I have attched some photos of the dumped stuff although it isn't easy to get a good image as you have to look down on it..."

Croydon Council Stuck In The Mud 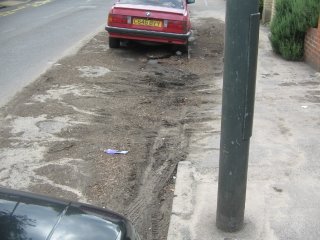 Despite being elected only last May it seems, if this email that I received yesterday is anything to go by, that Croydon Council have gone to sleep.

"My wife and I live at **(edited out) Chipstead Valley Rd. We returned from holiday on the 19th August to find a sea of mud deposited in the road and on the pavement outside our house.

This had been caused by the storms of the previous weekend washing all of the sediment and debris from St Andrews Rd down Sandown Rd before pouring out onto Chipstead Valley Rd, where the poorly designed drains couldn't cope with the amount of water and silt that was generated by the storm.

I telephoned Croydon Council on Monday 21st to advise them of this matter. When my wife telephoned them on Wednesday 23rd they had no record of the original complaint. This time the call was logged and a reference number was given. It is know the 3rd of September and Croydon Council have still not cleared up the mess.

We are informing you of this out of desperation as despite numerous telephone calls to the Council offices by us and our neighbours nothing has been done. There is now grass growing on the mud

Please see attached photo (1 of many).."

My message to Croydon Council is this: WAKE UP AND DO YOUR JOB!
Posted by Ken Frost at 9:33 AM No comments: 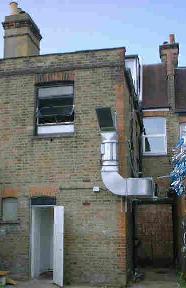 Those of you with long memories may recall an earlier article about Colin's troublesome erection.

It seems that although his erection has subsided, Colin is still having quite a few problems. To read more, please visit Colin's Troublesome Erection II.


As the old theatrical saying goes, "this could run and run!".
Posted by Ken Frost at 8:36 AM No comments: