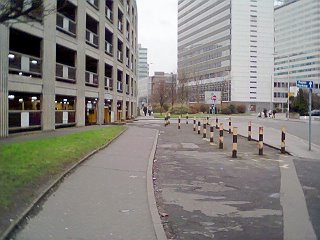 Those of you who need to have their memories refreshed as to how bad Dingwall Road, one of the main thoroughfares of Croydon, has become; may enjoy a brief "cyberwalk" down this most unlovely and unloved of Croydon's roads.

Visit Dingwall Road - A Vision of Post Nuclear Croydon to take the tour.

Admittedly, since the photos were taken one of the buildings has now been demolished. Unfortunately, all that remains is now an empty piece of waste ground shrouded by the omnipresent boarding that dominates Croydon's decaying landscape.

Arena To Be Ditched? 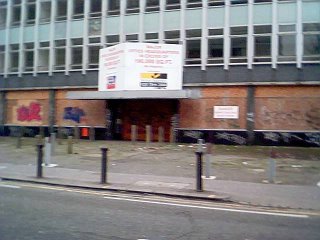 It seems that Croydon Council may finally be displaying some signs of common sense, at least when it comes to their daft idea to build an arena at the Gateway site on Dingwall Road.

If reports in the Croydon Guardian are to be believed, Croydon Council's opposition to building offices and homes on the site has been ditched.

Given the chronic housing shortage in the South East you would have thought that they would have jumped at the chance, wouldn't you?

Stanhope, the developers, are now reportedly able to start working on the site which has been derelict for 40 years.

Yes, read that again, the site has been derelict for 40 years; that is inexcusable!.

What does that say about the effectiveness of our beloved Croydon Council?

Some dinosaurs on the council may still claim that they want an arena (why for goodness sake?); yet realistically, as I have said on this site many times, it would mean that they would have to make a compulsory purchase of the site from Stanhope.

How on earth can they afford to do that?

We, the ratepayers and citizens of Croydon, have been let down badly by "our" council over the last few decades.

It is time that the council, and those political parties who vie for our votes every few years, were sent a message that we are not prepared to allow our town centre to decay any further.

The opportunity to deliver that message comes this May, when the local elections are being held.
Posted by Ken Frost at 8:06 AM No comments:

The Guardian report that new paving, tree planting and improved seating will be taking place in North End later this month. This is part of £240,000 improvements taking place in Croydon's main shopping street.

Improvements to the infrastructure are welcome, and indeed necessary.

However, what about addressing the decay and squalor that appears to been encroaching in the "no man's land" from where the nice paving stones stop and West Croydon begins?

It is almost as if there were an unseen border between the two areas, one well kept the other trashy, splitting Croydon into two.

You shouldn't split a city in two in this fashion.
Posted by Ken Frost at 3:23 AM No comments: