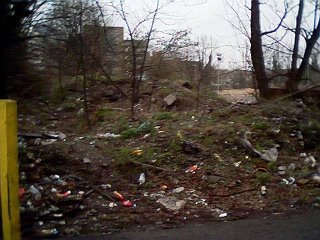 As we all know, Croydon Council is very keen to promote its "green and environmentally friendly" image.

We are constantly being told by the council that Croydon is greener and cleaner. Unfortunately for the councilors, ensconced in their bunker in Katherine Street, reality is a cruel mistress and often serves to contradict their deluded claims.

A walk down Dingwall road, for example, should cure even the most deluded members of Council that their claim to have improved the image and environment of Croydon is nonsense.

Maybe that is why Dingwall Road has undergone something of a transformation in the last week?

You will recall that on one side of the road, the hapless residents of Croydon are presented with decaying and crumbling office buildings awash with graffiti and filth?

On the other side there is a vast wasteland which was, until last week, half hidden by a crumbling ugly concrete wall.

Good news, the wall has been knocked down and replaced by yet another display of the rapidly spawning hoardings that now seem to be the common feature of the Croydon landscape.

The hoardings have even been painted green, doubtless to reinforce the council's "green image", no less than three times in the last week; each coat being a darker shade of green, than the one before.

Some may be deluded into thinking that this is an attempt by Croydon Council, and its associates, to show that they really are improving the image of the borough.

On the 4th of May this year the councilors face re-election, the hoardings and painting of the hoardings is nothing more than a cheap means of trying to convince the electorate that things in Croydon really are about to improve. This technique of covering up sites and areas that offend is usually employed by third world dictators.

It seems that the council have now descended to a new level.

Visit Dingwall Road - A Vision of Post Nuclear Croydon and take a walk down one of the main thoroughfares of Croydon.